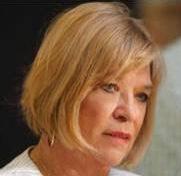 Joyce Clark is a 48 year resident of Glendale and the Yucca district. She has a BA in U.S. History and Education and graduated from the College of Notre Dame of Maryland. Her past careers include teacher of high school history, small business ownership of a book store, a professional ceramist , founder of a retail art/craft gallery and Glendale councilmember. Joyce and her husband, Charles, have three children and seven grandchildren.

Joyce was first elected as the Yucca district Councilmember in 1992 and served Glendale from 1992 to 1996. Joyce took a four year break from public service in 1996 when her mother was diagnosed with Alzheimer’s to personally care for her. In 2000 she successfully ran again for the Yucca district council seat as a write in candidate against an incumbent. She is the only candidate in Arizona to achieve a write in victory over an incumbent.

Joyce retired from public service in December, 2012, and as a private citizen Joyce did many of the things she never had the time to pursue. Just two of those were the tender care and feeding of her Koi pond and blog writing on issues in Glendale at http://www.joyceclarkunfiltered.com .

In March of 2016, Joyce, after many former constituent requests, made the decidion to run again for the Yucca district council seat in Glendale. With the enthusiastic support of family and friends and after having witnessed the incumbent's failure to connect with and to represent district residents and his abuse of taxpayer dollars for trips and festivals Joyce decided that she can do a better job and can "get your voice back" for residents who have been largely ignored since 2012.