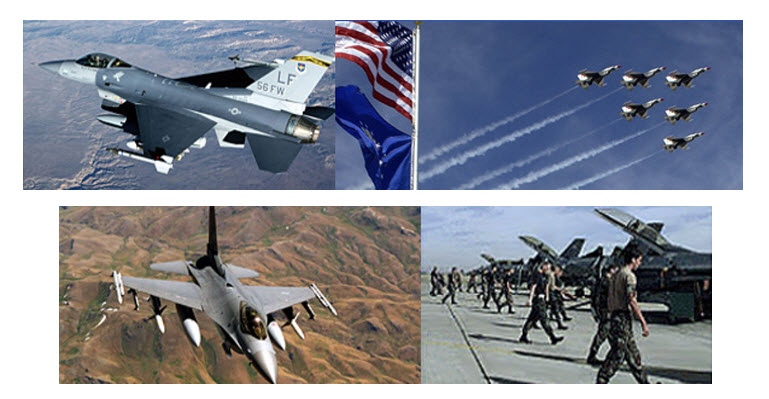 We Advocate, Educate,and Support the US Air Force.
Our founder was General  Jimmy Doolittle
We are one year older than the USAF
Our first objective was to get the "Air Force" as a separate service -  done in 1947
We support educational programs that stress STEM  technology
We support  wounded airmen - AFA Wounded Airmen Project  -
100% of donations go to wounded airmen
Cyber Patriot Program for school children
WELCOME TO THE FRANK LUKE CHAPTER of the AIR FORCE ASSOCIATION
Serving Team Luke since 12/31/80 and the entire Valley of the Sun since 2004
The latest issue of our quarterly newsletter is now available. Click on the newsletter photo at left, or on the link above.
We support Air Force units at Luke AFB and in the Greater Phoenix Metropolitan area, including 18 high schools around the Valley.
The Frank Luke Chapter is one of four in Arizona (for information on the Arizona State AFA. The chapters are located in Tucson, Sierra Vista, Prescott-Goldwater (including Sedona) and the Phoenix Metropolitan area. The Frank Luke Chapter absorbed members of the Phoenix-Sky Harbor Chapter on Oct. 1, 2004.
In June 1999, Arizona State AFA was realigned under the new Southwest AFA Region overseeing operations in Arizona, Nevada and New Mexico. On Oct. 1, 2004, the Reno, Nev. chapter closed, forcing the Nevada State organization to dissolve, since only the Las Vegas chapter remains in existence in Nevada.
In January 2000, our chapter started its first Website -- www.geocities/siliconvalley/park/9993. In 2004, volunteer Carol Coleman developed today's modern Website.
Our chapter has approximately 2,000 members -- military retirees, members on active duty, and many from the civilian community. Our group's focus includes soliciting community support by recruiting Community Partners among local businesses and surrounding communities, to develop a better understanding of and support for the U.S. Air Force. The Frank Luke Chapter is proud to acknowledge its Community Partners at every opportunity and to encourage our members' support of these establishments. Click on "Community Partners" for a current listing of local organizations that actively support Air Force programs and goals.